Hazen was a small rural town and I walked to and from school which was about a quarter of a mile. I don't remember too much about my first grade but I do remember that the school had "outdoor plumbing" which was located about 200 feet from the building. I do remember "doing my business" and missed the recess bell, well I was late for class and I was punished by the teacher by making me sit under her desk for 15 minutes, luckily she did not sit there because I would have probably bit her on the leg.

My second and third year was also in a small rural town and was heated with coal burning stoves, three classes per
room, and outdoor plumbing. I do remember playing marbles at recess and walking to a country store and buying
lunch. You could get a thick slice of baloney, a thick slice of cheese and a soda for 25 cents. I rode a school bus to
and from school and sometimes we would walk the railroad tracks home which was about a mile away.

Nothing very exciting happened during this time.

Nothing very exciting happened during this time.

During my Junior High days some interesting things happened to me and one I will
remember until the day I die.  In the 7th grade PE class, I had PE on Mondays,
Wednesdays and Fridays. On Fridays you were to take your PE clothes home and
have them washed for Monday. Well, I forgot to come to school on Monday with
mine. I also had a "BIG" pencil sticking out of my notebook with a "BIG" eraser
and the Coach asked me "why are you not dressed for PE?" I replied, "I forgot my
PE outfit at home, Coach!" He then said, "that's a nice pencil you have there!" Then
he took the pencil and cracked me on top of the head, "You won't forget them next
time, will you?" "No Sir!", I replied. He then cracked me again on the head. "Make
sure you don't!", he replied and then hit me again and carefully replaced the pencil
in my notebook. After PE, I took that pencil and threw it as far as I could!

During the 10th grade, my favorite courses were: Biology, Drafting, Typing, and Print Shop. I made all "A's" in Print Shop, I guess it was due to the fact that I had some experience from working in the print shop for the Little Rock Boy's Club.

In the 11th grade, I took Chemistry, 2nd Year Drafting, and Bookbinding. I also joined the Amateur Radio Club (W5RFS) and picked up a Novice Class License (KN5GRK) which was only good for one year at the time.

The Senior year was the most hectic of my school years. This was the year that the Federal Government integrated Little Rock Central High. Bomb scares, skirmishes between blacks and whites, clashes between citizens and Federal Troops happened on a daily basis. It was in the headlines in almost every newspaper in the world.  Here is a link to The Little Rock Nine. I received my High School diploma in 1958 and went on to electronic school.

I attended the 50th Little Rock Central High Graduation and Anniversary of Integration.  At the bottom of page you will see a picture of me.

Little Rock Central High School is the only High School on the National Historical Society records.  It had a Museum, Tourist Information Center. and a
Park dedicated to the school.

After graduation from high school, I enrolled in Draughn School of Radio taking courses in basic radio and Radio Servicing, and TV Repair.  After
completing these courses, I enrolled in FCC Radio Communications where I received my First Class Radiotelephone License and which later became
General Radiotelephone License.  I finished the course and part of the program the school offered was to find you a job.  A opening at KLFY-TV in
Lafayette, Louisiana was available and I decided to check it out, so I hopped on a bus went there for a interview and was hired as audio technician. 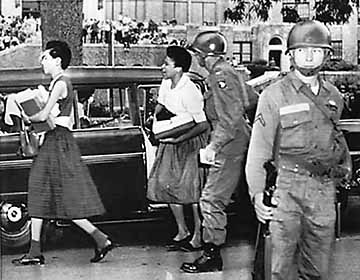